A woman who is being described as an IG ‘model’ and Travis Scott alleged sidechick leaked an image that is purportedly Kylie Jenner’s sonogram pic.

The image is now making its way around social media – and it shows that Kylie is due to give birth in January, to a girl.

There have been rumors for months that Kylie and Travis have an “open” relationship. According to multiple sources – including The Daily Mail & In Touch, the couple are not together exclusively, despite expecting another child together.

The woman claimed that Travis has Kylie’s sonogram pic as the screensaver on his phone, so they didn’t even have to unlock the phone to take a picture of the image.

Here are some text messages between the thottie and a popular blogger, where the woman admits to stealing the image.

Because the sonogram image is considered stolen property, we can not post it here. But it is available on Twitter. 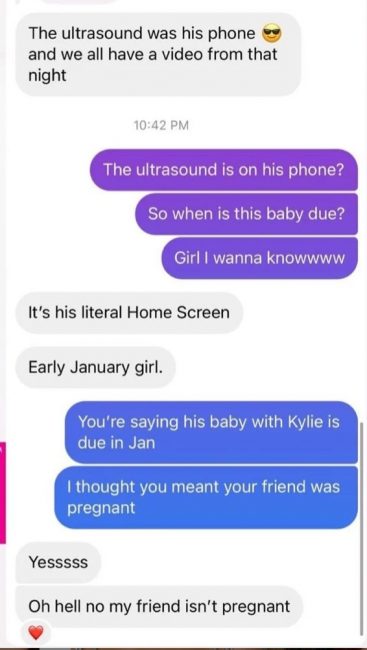